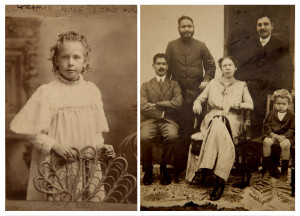 In 1898, my great-grandfather and his brother travelled from India to Edinburgh and married two extraordinary women: Jane Brown and Jane Batty. Abandoned by their Indian husbands, the two Janes struggled to pursue incredible careers in a Britain that frowned on interracial love. On a self-reflexive journey, I search for traces of their lives.

In 1898, my great-grandfather and his brother travelled to Edinburgh from India to study medicine and literature. Both brothers fell in love, and married two women called Jane.

This is a film about the two Janes, neither destined to live with their Indian husbands. They struggled to pursue extraordinary careers in a Britain that frowned on interracial love. I embark on a self-reflexive journey across three continents searching for traces of their lives.

My great-grandfather abandoned the bubbly, vivacious Jane Brown and their daughter, Amena, returned to India and married my great-grandmother. Amena was run over by a car and killed. Jane travelled to India as an ‘unmarried’ nurse. They met again, this time as secret lovers.

Jane Batty lived with her husband’s conservative aristocratic family in India. She wore saris and spoke Urdu. When her husband suddenly died, she returned to Edinburgh with two infants and became a novelist. She was formidable, entrancing, a suffragette. Her sons never spoke about their Indian origins.

Their stories are reconstructed through memoirs, letters, photographs and cine-film. My journey is captured on impressionistic 8mm-film sequences, and narrated through my voice and conversations with historians and descendants.

An immigrant and single mother of two boys, I piece together clues amidst threads of science and literature, medicine and poetry, fact and fiction, love and loss, as the gripping stories of the two Janes are gradually revealed. Their lives were separate but intertwined, crossing paths, and form a fascinating window into the struggles of British women in the early 20th century.